Robert Wood Nudelman, 52, a legendary figure in the fight to preserve Hollywood's heritage, passed away suddenly at his father's home in Tucson early this week.  Ever present at meetings and hearings in the Hollywood community for 30 years, Nudelman is often credited as a driving force behind the restoration of landmark theaters and other buildings in Hollywood, spearheading a renaissance of the once-blighted area. 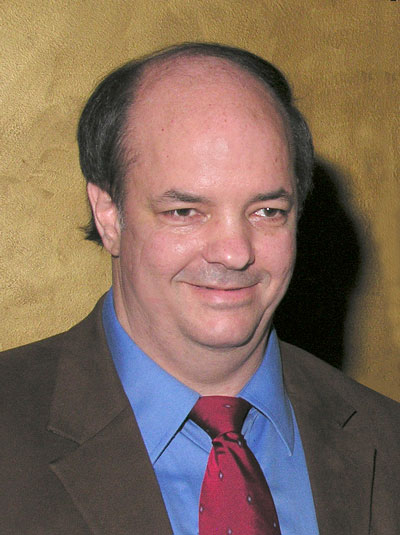 The loss of such a pivotal community leader has been met with unspeakable shock and sadness.  He was the longtime Director of Preservation Issues for Hollywood Heritage, and was a past President and Board Member of the organization and Curator of its Hollywood Heritage Museum.  He was a Vice President of the Society for Cinephiles/Cinecon Classic Film Festival and president of the Project Area Committee for the Hollywood Redevelopment Area.  At the time of his death, he was working with Debbie Reynolds and her son Todd Fisher on the Hollywood Motion Picture Museum in Tennessee.

Nudelman was the son of Ruth Donovan Wood and Dr. Sol Nudelman, a leader in medical imaging.  He grew up in Illinois and Rhode Island before a stint in Germany and then Tucson.   He studied Theater Arts at the University of Arizona. His brother Mark Jonathan and mother preceded him in death.

Nudelman launched his activism with the fight to save Lot 2 at the MGM Studios, and soon with the Wiltern Theater. He figured prominently in the campaigns to change minds and plans for such important landmarks as the El Capitan Theater, the Cinerama Dome, and the ABC/Merv Griffin Studios facade.  Making his name synonymous with Hollywood and film history, he provided historical photographs, data, and restoration details to countless property owners of such landmarks as Grauman's Chinese Theater, the Egyptian Theater, the Pantages Theater and the former Schwab's Clothing Store. There probably isn't a single historic building or development project in Hollywood that Mr. Nudelman didn't have a part in, sharing his encyclopedic knowledge, agitating for better and more consistent planning, and defending Hollywood's heritage.

His work has received many awards, including those from the LA County Board of Supervisors, the LA Historic Theatre Foundation and the Hollywood Highlands Democratic Club. As an expert on Hollywood history and preservation issues he has been interviewed and widely quoted in more than 150 publications, both local and nationwide, and has appeared on radio and television programs worldwide. He was the co-author of two books on Hollywood's history with Hollywood Heritage president Marc Wanamaker: "Historic Hollywood: A Centennial History" and "Images of America, Early Hollywood."

Showcasing the Hollywood area, Nudelman developed and led the Historic Hollywood Theatre tours for the National Trust for Historic Preservation's 2000 annual conference, and the same for the 2007 California Preservation Foundation Conference.  He has frequently provided written and/or verbal testimony on historic preservation compliance at the request of Congressman Henry Waxman, California State Senators Hayden and Polanco and various high-ranking federal and state committees including the California State Assembly and Senate Joint Hearing on the Los Angeles Metro Rail Project and the Los Angeles MTA.

Nudelman made friends of enemies, keeping up a constant dialogue with politicians, property owners, and neighborhood activists, who learned to treasure his storehouse of knowledge, his intelligence, and his uncanny ability to be right.  He was tireless in his contributions to the Hollywood community.

Nudelman was in the state to help care for his ailing father, and his body was discovered by a family friend after Robert had failed to appear at his father's hospital bed for several days.  The cause of death was determined by the Pima County Medical Examiner to be coronary disease.